Quicksilver and the Scarlet Witch (Table of Contents)

Brodsky inks per Nick Caputo, May 2014. Title taken from story. 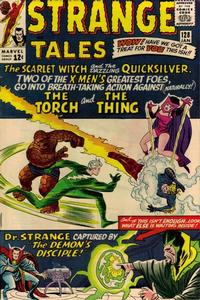 Quicksilver and the Scarlet Witch (Table of Contents: 1)

Dr. Strange Master of the Mystic Arts (Table of Contents: 3)

The Demon's Disciple! (Table of Contents: 4)

Genre
superhero
Characters
Dr. Strange; Disciple (unnamed); The Demon
Synopsis
Dr. Strange receives a desperate plea for help from a man who became a disciple of someone called The Demon not realizing the seriousness of the situation. The Demon transports the man back to his lair and consigns him to a pit beneath the floor. Strange tracks the man's location and confronts the evil mystic in an epic battle. Dr. Strange places a mystic veil over The Demon's mind, explaining that when it is lifted he will know who defeated him and who can defeat him. Strange frees the disciple, bidding him to go on his way and never look back.
Reprints