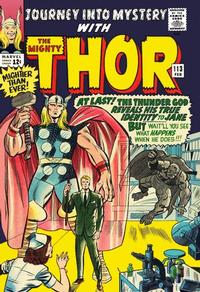 First Line of Dialogue or Text
When imperious Odin commands, Thor must obey!
Genre
superhero; fantasy-supernatural
Characters
Thor [Don Blake]; Jane Foster; Odin (guest star); Balder (guest star); Loki (villain); Grey Gargoyle [Professor Paul Duval] (villain); Heimdall; Honir the Hunter (introduction)
Synopsis
Thor upsets Odin again by declaring his love for Jane Foster. Don Blake reveals his secret identity to Jane, but she doesn't believe him. He stamps his cane and nothing happens because, unknown to him, Odin has removed the enchantment which allows him to become the God of Thunder. The Grey Gargoyle appears and attacks Don and Jane. They flee. Odin sends Honir the Hunter to aid Blake. Honir distracts the Gargoyle and grants Blake the ability to become Thor for 30 seconds, long enough to defeat the Gargoyle. Blake assists Jane and retracts his earlier admission saying the madness has left him.
Reprints

First appearance of Honir the Hunter.

The Boyhood of Loki! (Table of Contents: 12)

First Line of Dialogue or Text
Throughout the ages, the immortals of Asgard have thrilled to athletic contests, even as mortals do today!
Feature Logo

Part 2 of Loki's origin. Second biographical Loki story, the first appearances of Uller and Volsak. During the story, Thor is ten years old.

First Line of Dialogue or Text
Dear Stan and Jack, Jack, who ever told you that you could draw?
Feature Logo