The Terrible Trio (Table of Contents) 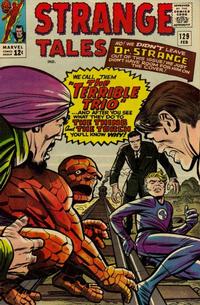 The Terrible Trio! (Table of Contents: 1)

Genre
superhero
Characters
Doris Evans ("Dorrie"); Human Torch [Johnny Storm]; Yogi Dakkor; Handsome Harry Phillips; Bull Brogin; Thing [Ben Grimm]
Synopsis
On the golf course, Doris nags Johnny by comparing him to "gentlemanly" Peter Parker. When the latest emergency arises, she says a girl like her should have her head examined. Johnny falls into a trap of The Terrible Trio, but manages to send out a distress signal to Ben, who takes on these losers and saves Johnny's life in a railway yard.
Reprints

Third (and final) appearance of "The Terrible Trio"; previous appearance in STRANGE TALES #122 (July 1964). With his costume and flying carpet, Yogi Dakkor may have served as the inspiration for the 1967 SPIDER-MAN cartoon villain, "The Fabulous Fakir." Johnny & Doris have a run-in with The Beetle, Peter Parker (and Spider-Man) in AMAZING SPIDER-MAN #21 (February 1965) shortly before this story.

Beware...Tiboro! The Tyrant of the Sixth Dimension! (Table of Contents: 2)

Genre
superhero
Characters
Dr. Strange; Dr. Green (scientist); Schuyler (scientist); Mr. James (producer, "The Twelth Hour" TV show); The Ancient One; Tiboro
Synopsis
A panel of three scientists appear on a TV program, rejecting Dr. Strange as an authority on the supernatural and dismiss magic as superstition. When the lights go out the men vanish and Dr. Strange is summoned. He discerns that the idol they dismissed is a gateway to the dimension of Tiboro, a powerful entity set to attack Earth. Strange travels to Tiboro's land and a fierce battle commences. Strange triumphs and returns to earth with the scientists who intend to expose the truth on TV. The mystic weaves a spell of forgetfulness, returning the men to the point before the lights went out.
Reprints

On this issue's letters page, Stan says he "asked Steve to come up with something really different for next issue," indicating that Ditko may have been plotting the series solo for some time.