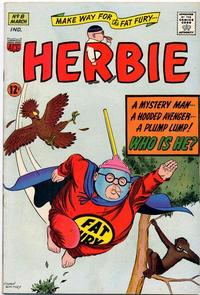 Make Way for the Fat Fury! (Table of Contents: 1)

Origin of the Fat Fury. Story title matches the tagline at top of Herbie comic covers.

First Line of Dialogue or Text
I've got to get a date---any date!
Genre
humor
Characters
Nellie No-Date
Synopsis
Nellie tries everything, but can't get a date. She is stopped for speeding and is over-joyed to get a date to see the judge.
Keywords
motorcycle policeman; speeding; street cleaner