Even an Avenger Can Die! (Table of Contents) 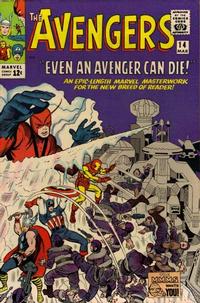 Even Avengers Can Die! (Table of Contents: 2)

First Line of Dialogue or Text
Yes, even to those who have become a legend in their time, death is possible!
Genre
superhero
Characters
The Avengers [Captain America [Steve Rogers]; Iron Man [Tony Stark]; Giant-Man [Hank Pym]; Thor [Donald Blake]; Wasp (cameo)]; Rick Jones (cameo); Kallusians; Doctor Svenson; The Watcher
Synopsis
In order to save the Wasp's life, the Avengers seek out the help of Dr. Svenson, only to find he's been replaced by an alien from the planet Kallu.
Reprints

It is revealed in the letters page that Stan Lee wrote six consecutive pages of the story; likely pages 14-20 as he has often mentioned the speech by the Watcher at the end of the story.

All About the Avengers / letters page / 2 pages (report information)