The Defeat of Dr. Strange! Meet.. the Beatles! (Table of Contents) 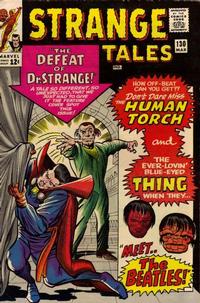 Meet the Beatles! (Table of Contents: 1)

Genre
superhero
Characters
Thing [Ben Grimm]; Human Torch [Johnny Storm]; Mr. Fantastic [Reed Richards] (cameo); Invisible Girl [Sue Storm] (cameo); Alicia Masters; Doris Evans ("Dorrie"); John Lennon; George Harrison; Paul McCartney; Ringo Starr
Synopsis
Ben and Johnny have another one of their "fights," then have to clean up Reed's lab as a result. They take Alicia and Doris on a double-date to see The Beatles, the girls getting to meet the rock stars in person and get autographs; but Ben and Johnny wind up having to go after some crooks who robbed the box-office. A wild free-for-all at Coney Island ensues, but by the time our heroes get back to the theatre, the show's over! Doris says, "Maybe someday I'll understand why anyone would want to be a super-hero!"
Reprints

Story takes it title from The Beatles 1st US Capitol LP (1964). Bob Powell takes over from Dick Ayers for the remaining 5 episodes of the series.

The Defeat of Dr. Strange (Table of Contents: 2)

Genre
superhero
Characters
Dormammu; Baron Mordo; Dr. Strange; The Ancient One; Hamir (unnamed); Sen-Yu (The Ancient One's accountant, Hong Kong)
Synopsis
Dormammu agrees to give Mordo limitless power so that he may destroy Dr. Strange. In Tibet, Mordo and two followers attack. Strange manages to whisk his aging mentor to safety. As Strange leaves his mentor with a loyal hermit, Dormammu sends spirits to search for him. Strange attempts to lure the spirits away from his weakened mentor. In Hong Kong, Strange contacts The Ancient One's accountant, who gets him a passport while he rests. Before long, Strange is surrounded by Mordo's minions, and after a short battle, is on the run again.
Reprints