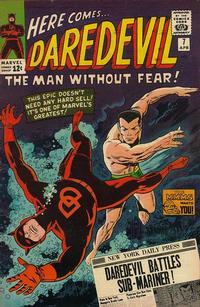 In Mortal Combat with... Sub-Mariner! (Table of Contents: 1)

Genre
superhero
Characters
Daredevil [Matt Murdock]; Namor, the Sub-Mariner; Lady Dorma; Foggy Nelson; Karen Page; Warlord Krang (villain)
Synopsis
Namor hires Franklin and Murdock to sue the human race on his behalf. When this doesn't work, he gets himself arrested so he can have his day in court. Realizing humanity won't listen, the Sub-Mariner goes on a rampage which brings Daredevil into the (hopeless) fray. Namor returns to the sea out of respect for DD and to stop Krang from taking over Atlantis.
Reprints

Daredevil changes from a yellow-and-red costume to an all-red this issue. This adventure with the Sub-Mariner is the set-up to the continued Sub-Mariner feature "The Quest" in Tales to Astonish #70.