Wonder Woman figure based on splash of story in All-Star #8. Credits by Jerry Bails. 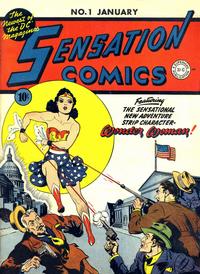 First Line of Dialogue or Text
Boys and girls:--
Reprints

[The Marriage of Jon Valor] (Table of Contents: 5)

[The Origin of Mr. Terrific] (Table of Contents: 6)

Genre
superhero
Characters
Mr. Terrific [Terry Sloane] (introduction); Wanda Wilson; Billie Wilson (Wanda's brother); Fair Play Club; un-named Big Shot (villain)
Synopsis
Socialite and master of every field of human endeavor, Terry Sloane adopts the identity of Mr. Terrific to escape boredom, but soon finds a purpose in life after saving the life of Wanda Wilson and getting her brother out of the clutches of a local hoodlum.
Reprints

[The Origin of the Gay Ghost] (Table of Contents: 7)

Gunner Godbee (A Story of the First World War) (Table of Contents: 8)

Genre
war
Characters
"Gunner" Goodbee; Nick; the Nazis (villains, some die)
Synopsis
In this story of the First World War, American war ace, "Gunner" Godbee and his buddy Nick, aboard a patrol ship, are suddenly attacked by two German Heinkel aircraft and shot down.
Reprints

[The Origin of Little Boy Blue] (Table of Contents: 10)

Writer identification by Martin O'Hearn. Blummer signed his initials on every page of this story. Letterer credit added by Craig Delich.

[The Origin of Wildcat] (Table of Contents: 13)