Remarkable Ruse of the Riddler! (Table of Contents) 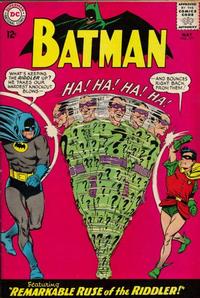 What's Wrong with These Pictures! (Table of Contents: 1)

Remarkable Ruse of the Riddler! (Table of Contents: 2)

Genre
superhero
Characters
Batman [Bruce Wayne]; Robin [Dick Grayson]; Smiles Dawson (introduction); Roger Peale (introduction); The Riddler [Edward Nigma] (villain, has 5-page history); Riddler's gang (villains); Molehill Mob (villains)
Synopsis
The Riddler is released from prison and informs the Dynamic Duo that he has turned from crime, and, as proof, leads them to the hideout of the Molehill Mob. But when the former felon begins deluging them with riddles, the Caped Crusaders aren't sure he really has reformed.
Reprints

On the page immediately preceding page 9 of the main story sequence.