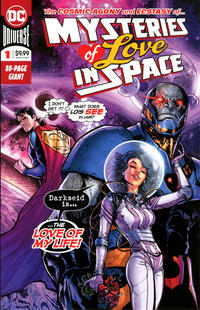 First Line of Dialogue or Text
...But I will be honest, I wasn't sure if I was going to hear from you again.
Genre
superhero
Characters
Green Lantern [Kilowog]; Dolene; Green Lantern [Guy Gardner]; Green Lantern [C'Jon]
Synopsis
Kilowog gives a young recruit some advice.

First Line of Dialogue or Text
Your drunk is as ugly as your face, pal.
Characters
Bizarro; Grotesqua
Synopsis
Bizarro finds love.

GPS I Love You (Table of Contents: 6)

First Line of Dialogue or Text
You did what to the old gal?
Genre
science fiction
Characters
Space Cabbie; A.I.D.A.; Colfax
Synopsis
Space Cabbie falls in love with the new GPS system in his space-cab.

First Line of Dialogue or Text
And the winner of tonight's bout...
Genre
superhero
Characters
Crush; Ayana; Trey
Synopsis
Crush learns that Ayana is not her friend.

First Line of Dialogue or Text
...I'm such an idiot.
Genre
superhero
Characters
Superman [Clark Kent]; Lois Lane
Synopsis
Lois thinks back on her relationship with Superman and with Clark Kent.

The Planet and the Pendulum! (Table of Contents: 9)

First Line of Dialogue or Text
Those alien invaders... shooting space-torpedoes at me...
Genre
adventure; science fiction
Characters
Adam Strange; Alanna; Sardath; citizens of New Ranagar; barbarians of the tribe of Zoora from the city Yardana (villains); invaders from Morleen (villains)
Synopsis
Zapped by the zeta-beam, Adam is teleported, not to Rann, but to Anthorann, a neighboring planet. Escaping barbarians and their "Rainbow Doom" (a teleporter), he meets Alanna and Sardath, who had used knowledge from Samakand scientists to journey to Anthorann, but crashed. Adam dons a Rann spacesuit from the wreckage and faces invaders from Morleen, who swing a "diamondium" pendulum to cut open the dome of New Ranagar. Adam ray-blasts the shaft, then fades away to Earth.
Reprints
Keywords
Anthorann; Rainbow Doom; Zeta-beam

Inside back cover publisher & indicia information page with a two-tone (red & white) close-up illustration of two women about to kiss.

Back cover illustration featuring a gaseous planet with the DC logo embossed across its surface floating inside a heart-shaped planetary ring plus the barcode.