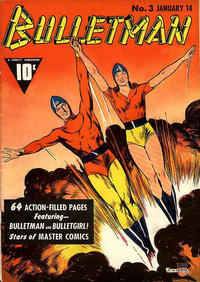 [The Lightning King] (Table of Contents: 2)

On page 2, panel 3, a newspaper listing the fatalities from the airliner crash lists artist Pete Riss.

Illustrated house advertisement for America's Greatest Comics #1 (1941) featuring a reproduction of the cover.

[Dropping Into the Parachute Corps] (Table of Contents: 6)

[The Case of the Murdered Millionaire] (Table of Contents: 7)

Swords For Two (Table of Contents: 8)

The illustration appears to have a signature that is difficult to read.

Genre
superhero
Characters
Bulletman [Jim Barr] [aka Fritz]; Miss Lloyd; Captain Glume; Mr. Wood; Petie (sailor, death); The Black Rat (villain, introduction); McKeefe (villain, killer); Pitelli (villain)
Synopsis
An ad in the newspaper for a rather dangerous and mysterious voyage to Mystery Island, from which no one has ever returned alive, perks the interest of the Police as well as Susan and Jim.
Reprints
Keywords
Fate (a ship); Mystery Island

The Black Rat apparently dies at the end of the story.