"The Trial of the Gods!" (Table of Contents) 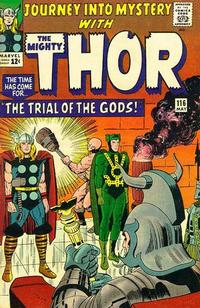 First Line of Dialogue or Text
At last, Thor and his evil arch-enemy Loki, are about to undergo the most dangerous test of all time, to determine which of them has lied to regal Odin, immortal monarch of Asgard!
Genre
fantasy-supernatural; superhero
Characters
Thor [Don Blake]; Odin; Balder; Jane Foster; VILLAINS: Loki; Enchantress; Executioner; Yagg [Invincible Slayer](introduction, death); CAMEOS: The Avengers [Captain America [Steve Rogers]; Iron Man [Tony Stark]; Giant-Man [Henry Pym]; Wasp [Janet Van Dyne]; Rick Jones; Daredevil [Matt Murdock]; Frightful Four [Wizard [Bentley Wittman]; Sandman [Flint Marko]; Paste-Pot Pete [Peter Petruski]; Madam Medusa]
Synopsis
Odin sends Thor and Loki to Skornheim to endure the Trial of the Gods which will show which one of his sons is lying to him. Against Odin's decree, Loki uses magic to escape the traps of the enchanted land while Thor has to rely on brawn and sheer will. Meanwhile, the Enchantress and the Executioner set about tormenting Jane Foster in a bid to influence the outcome of the trial. Odin sends Balder to deal with them.
Reprints

This story takes place at the same time as Daredevil #7 and Fantastic Four #38. First appearance of the land of Skornheim. Nick Caputo suspects that Carl Hubbell provided alterations on the figures of the Executioner, the Enchantress and Daredevil on pages 11-13, per his blog:

First Line of Dialogue or Text
In Thor #63, we saw how Loki won himself an ally in preparation for his eventual battle with the thunder god! (see notes)
Genre
fantasy-supernatural; superhero
Characters
FEATURE: Thor; GUEST: Princess Rinda (I); VILLAINS: King Hymir (I); Loki
Synopsis
On a diplomatic mission, Loki convinces King Hymir to put Thor to a deadly test where failure means slavery to the evil king. Thor, of course, passes the test, much to the annoyance of Hymir who strikes Loki and accuses him of betrayal.
Reprints

The "first line" sequence mentions Thor #63, but it is likely meant to refer to Journey Into Mystery #115 when Loki made an alliance with Ghan, the storm giant.

The Hammer Strikes (Table of Contents: 5)