On-sale date from ad in Justice League of America #35 and copyright registration. 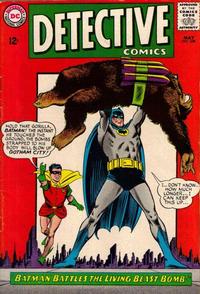 What's Wrong with These Pictures? (Table of Contents: 1)

Inside front cover; published in cooperation with the National Social Welfare Assembly.
Previously appeared in DC comics cover-dated May 1960.

Genre
superhero
Characters
Batman [Bruce Wayne]; Robin [Dick Grayson]; Walter Hewitt (first appearance); Karmak the Gorilla (first appearance, villain)
Synopsis
Walter Hewitt, a loner scientist, develops a ray that gives him the abilities of animals. Unfortunately something goes wrong and a gorilla gets his intelligence and forces him to commit crimes. Batman battles the gorilla but it uses the ray to get Batman's abilities. The gorilla makes a bomb that will go off if he is defeated but Batman figures out how to stop the bomb from exploding.
Reprints

The Counterfeit Crime-Buster! (Table of Contents: 10)