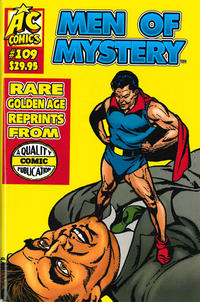 Genre
historical
Characters
Corsair Queen [Lila Evans]; Monk; Captain Rex (villain)
Synopsis
When their ship begins to flounder, Lila and Monk put into Corpse Cay, which is run by the nefarious Captain Rex, a buccaneer pirate who encouraged piracy for his own profit. Because Lila's father was killed by buccaneers, she has vowed to kill all such men....and Captain Rex will be no different.
Reprints
Keywords
Corpse Cay; The Destroyer (sunk); The Destroyer II

[Enter: Silk and Her Highness] (Table of Contents: 4)

Genre
superhero
Characters
Kid Eternity; Mr. Keeper; Samson (historical character); Silk (villain); Her Highness (villain; introduction)
Synopsis
Kid Eternity's powers are removed by Mr. Keeper when the Kid mis-uses them to transform two ordinary guys into "he-men." However, two crooks witnessed this scene and informed Her Highness of this, and she ordered Silk to capture the men and bring them to her. Mr. Keeper then restored the Kid's powers, and he called upon Solomon to defeat Her Highness' gang so the Kid could restore the he-men to normal.
Reprints

[The Curse of the Marshwoods] (Table of Contents: 5)

First Line of Dialogue or Text
We'd be honored to have you as guest of honah...
Genre
superhero
Characters
Lady Luck [Brenda Banks]; Mrs. Van Dotage (banquet host)
Synopsis
Lady Luck is invited to a special banquet by the Montrose Alumnae Association to receive an honorary degree. The problem is that the host has taken ill and has decided the Brenda Banks should take over and be the one to introduce Lady Luck.
Reprints
Keywords
Wakemore Hall

Alliance of Evil (Table of Contents: 8)

Genre
historical
Characters
Captain Daring; Patch; Sir Mark Drayton (Governor of Illyria); Lady Delores Drayton; Captain Jigg (villain); Captain Foxx [aka the Red Fox)
Synopsis
Capturing the villainous Captain Jigg, Captain Daring is warned by his foe that he will never overcome the Red Fox. Sure enough, through deception, Captain Foxx takes over the island of Illyria and declares himself the new governor. Thanks to the daring of Lady Delores, Jigg and Foxx go at one another, allowing Daring and his men to overcome them.
Reprints
Keywords
Illyria; pirate; The Revenge (Captain Daring's ship)

Inker credit verified by Zakarin in interview with Jim Amash in Alter Ego #27 (August 2003), which reprints the splash page.

[Treasure of the Sargasso] (Table of Contents: 9)

Genre
superhero
Characters
Invisible Justice [aka Invisible Hood] [Kent Thurston]; Professor Clark; Sanchez (villain, ship's captain, introduction)
Synopsis
Kent and Professor Clark make their way to the Sargasso Sea on a scientific expedition to go down in a diving bell nearly a mile to see what the area looks like. On the way, the ship's captain and crew take over the voyage and make the dive themselves, recovering an old iron chest full of jewels and money that Sanchez and his partner has stolen years before. The Invisible Hood takes over and conquerors the entire crew.
Reprints
Keywords
Sargasso Sea

First Line of Dialogue or Text
Golly! The backdrop's going up!
Genre
humor; adventure
Characters
Torchy [Torchy Todd]; T. Bolerini (voice teacher);
Synopsis
Torchy assists a female singer, being trained by Bolerini, with ice cream for her sore throat. Unfortunately, the lady eats so much ice cream, it freezes her vocal cords and she cannot sing at the evening's concert. Bolerini selects Torchy as her replacement, even though she cannot sing a note.
Reprints
Keywords
adult

[The Venusian Expedition] (Table of Contents: 11)

Genre
science fiction; western-frontier
Characters
Blaze Barton (assistant of Professor Solis); Professor Solis; Betty Solis; Venusians (introduction); The Bat Men; King of the Core-Men (villain); Core-men (villains)
Synopsis
After the Earth has been burned to a cinder, from passing too close to the Subn, Blaze has to face a group of monsters emerging from Earth's core.
Reprints

Oddity: Blaze was a Flash Gordon type hero who lived in a time after the year 5029 when the Earth's orbit was nearer to the Sun. However, in this one story, the year is 3000.

Roy Talon is a company by-line for the strip and not the name of a real personage.

Genre
humor
Characters
Woozy Winks; King Regibald (villain); Reginald's advisors [Ackley; Rook] (villains)
Synopsis
Taking a break from crime busting, Woozy takes a trip to Dopi Island and suddenly finds himself King of the island...an attempt by the true King's advisers to get a pasty to get wasted to let the crooked King off the hook for robbing his subjects blind.
Reprints
Keywords
Vericose Lines

Genre
crime; spy
Characters
T-Man [Pete Trask]; Manovitch (underground agent); Commissar Karkov (villain); Comrade Zorita (villain, female agent); Leo Vinski (villain, double for Trask); Comrade Tasoff (villain); Comrade Kremski (villain)
Synopsis
Trask learns of a nefarious plot to blow up the Allied capitals of the world after having taken the place of a Russian named Vinski, and his suicidal job is to stop the plan. A fly in the ointment is that Trask's true identity has been uncovered and he is at the mercy of Comrade Zorita.
Reprints
Keywords
Australia; East Berlin; England; Kremlin Sabotage School

First Line of Dialogue or Text
When Betty Bates, lady-at-law, caught the bridal bouquet....
Genre
adventure
Characters
Betty Bates; Norma (Betty's friend); Dick (Betty's husband); Alice (Betty's acquaintance); unnamed bearded man (Dick's uncle); Dick (villain, Norma's husband)
Synopsis
District Attorney Betty Bates catches the wedding bouquet at her friend's wedding indicating she'll be the next to get married. However, a strange, bearded gentleman, seeing the departing couple getting ready to leave, announces that it was a "wedding of death" and intimates that the wedding flowers will bring death. Dick thinks the whole thing revolves around the ghost legend of his estate, called The Hallows. It's up to Betty to discover the truth.
Reprints
Keywords
The Hallows (estate)

The Lady of the Pearls! (Table of Contents: 15)

Genre
spy; adventure; war
Characters
Black X [Richard Spencer]; Batu; Inspector Beef Burton; Count Morado's daughter; Graspon (villain); Graspon's gang (villains)
Synopsis
Black X and Batu come across two ruffians trying to load a coffin into a truck. The men flee, and the coffin is taken to Black X's apartment where a man named Graspon wishes to buy it for $20,000. When X refuses the offer and Graspon leaves, X opens the coffin to discover the living but unconscious body of a beautiful girl. Graspon meanwhile goes out to hire thugs to forcibly take the coffin and contents away from X.
Reprints
Keywords
Kingdom of Wyndrantz

[Big Joe Ryan and the Silver Bracelet] (Table of Contents: 16)

First Line of Dialogue or Text
Here's the story on Big Joe Ryan!
Genre
detective-mystery
Characters
Chic Carter; Chic's newspaper city editor; Big Joe Ryan (villain, introduction); Louella (villain, introduction); Blackie (villain, Ryan's chauffeur, introduction)
Synopsis
Chic writes a story on Big Joe Ryan and immediately is confronted by a lady wanting him to go to a certain jewelry store and pick up a silver bracelet, and upon delivery to her, he is to get a cool $500! But Ryan meets up with Chic and somehow the bracelet disappears before Carter can deliver it... and Carter is arrested for robbery. But Chic discovers that he has been played for a sucker with a phony, frozen mercury bracelet, and thus seeks out Ryan.
Reprints

Genre
jungle
Characters
Samar; Frank (introduction); Jane (introduction); Bill (villain, introduction, reforms)
Synopsis
Samar comes upon a man and woman being attacked by a giant gorilla upon returning to civilization from a gem expedition and saves their lives. But treachery strikes Samar and he goes on the trail of Bill who has forcibly taken the girl. Samar saves both from an elephant stampede and they reunite with Frank and all is well.
Reprints

John Charles is likely a by-line used at Quality Comics and not a real person.

Genre
adventure; war; military
Characters
Blackhawk; Blackhawks [Chop-Chop; Chuck; André; Stanislaus; Olaf]; Madam Fury (villain, introduction); Krushkov (villain, introduction)
Synopsis
The Blackhawks respond to an SOS from a sinking Allied freighter that has been attacked by Chinese pirates, which means that Madam Fury is at work again. After being captured, the Blackhawks suddenly pull out their ace-in-the-hole: "Operation Booby Trap", and round up all the pirates including Madam Fury.
Reprints
Keywords
China Sea; Monos (Allied freighter)