On-sale date from ad in Showcase #56 and copyright registration.

The World of the Magic Atom! (Table of Contents) 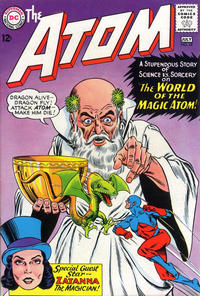 Genre
advocacy; superhero
Characters
Superboy
Synopsis
Superboy shows Frank that he can be creative, regardless of whether his creations are perfect, and that an expressive hobby can provide lifelong enjoyment.

Inside front cover; published in cooperation with the National Social Welfare Assembly.
Previously appeared in DC comics cover-dated May 1952.

World of the Magic Atom! (Table of Contents: 2)

Johnny Gets His Own Monster Koach! (Table of Contents: 4) (Expand) /

On the page immediately following page 18 of the main story sequence.