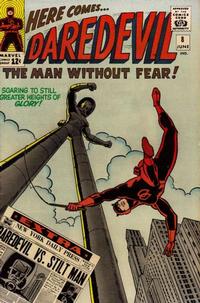 The Stiltman Cometh! (Table of Contents: 1)

Genre
superhero
Characters
Daredevil [Matt Murdock]; Foggy Nelson; Karen Page; Stilt-Man [Wilbur Day] (villain, introduction); Carl Kaxton (villain, introduction)
Synopsis
Nelson and Murdock are hired by a disgruntled scientist who claims his boss stole his invention. The scientist turns out, not only to be the real thief, but also the new villain, Stilt-Man. Karen, who's been looking into an eye operation for Matt, accuses him of cowardice and inability to fall in love when Matt tells her the operation's too risky.
Reprints

Issue includes cutaways of both Daredevil’s billy-club and Matt Murdock's apartment. Stilt-Man is called "Stiltman" throughout this story.