A Blind Man Shall Lead Them! (Table of Contents) 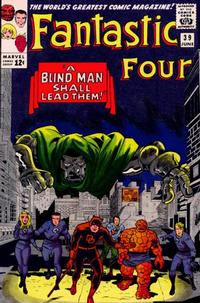 A Blind Man Shall Lead Them! (Table of Contents: 2)

Page 4, which features Kirby's photo-collage, appears to be inked by Carl Hubbell who was on staff for a period of time. The collage page likely had to be worked on in the office and Hubbell was available. Info per Nick Caputo, May 2014.