"Into the Blaze of Battle!" (Table of Contents) 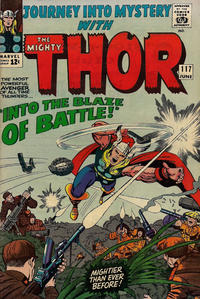 "Into the Blaze of Battle!" (Table of Contents: 2)

First Line of Dialogue or Text
By sheer trickery, the evil Loki has managed to return to Asgard, seconds ahead of Thor, thus winning the awesome "trial of the gods"...
Genre
superhero
Characters
F: Thor; GS: Odin; Balder; Norn Queen [Karnilla]; Don Blake; V: Loki; Enchantress; Executioner; Hu Sak (I)(D); Viet Cong; I: Cho and Cho's and Hu Sak's mother (both D); Kim (Cho's and Hu Sak's sister); GA: Jane Foster
Synopsis
Loki wins the Trial of the Gods through deceit and trickery. He broke the rules by using enchanted Norn Stones, which he now discards through a dimensional portal. Odin gives Thor 24 hours to prove Loki's dishonesty. On Earth, Balder has been battling the Enchantress and the Executioner who were tormenting Jane Foster. Thor arrives and the two villains flee. Thor flies to Vietnam in search of the Norn Stones. There he becomes involved in that country's war. He rescues a Vietnamese girl named Kim after her the rest of her family is killed as a result of their opposing ideologies.
Reprints
Keywords
Norn Stones; Vietnam

"The Sword In the Scabbard!" (Table of Contents: 4)

First Line of Dialogue or Text
Asgard has been at peace too long!
Genre
fantasy-supernatural; superhero
Characters
Thor; Loki; Odin; Warriors of Asgard
Synopsis
The warriors of Asgard are bored and Loki has been able to stir up trouble among their ranks. Odin is furious and intervenes when Thor and Loki face each other in combat. Odin then shows them the state of the Odinsword. According to legend, the universe will perish if the sword is ever drawn from its scabbard. Now, an evil force has broken the scabbard. Odin sends his sons on a quest to find this unknown enemy and put an end to this evil scheme.
Reprints

The Hammer Strikes (Table of Contents: 6)

First Line of Dialogue or Text
Ready for the biggest announcement yet?
Reprints