This issue is a variant of Captain Marvel (Marvel, 2019 series) #1 [Amanda Conner]. There exist further variants.

The cover image is taken from the last page of the interior story. 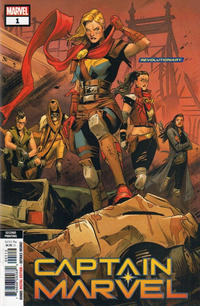 Three all-black pages and a pencil drawing of Lee by Noto.

First Line of Dialogue or Text
Fighter. Soldier. Hero. Pilot.
Genre
superhero
Characters
Captain Marvel [Carol Danvers]; Spiderwoman [Jessica Drew]; Iron Man [Tony Stark]; Hazmat [Jennifer Takeda]; James Rhodes; Ripley Ryan; Mahkizmo [as Nuclear Man]; Thor; Captain America
Synopsis
Carol and Jess fight a Kraken. Tony discusses bringing Carol back into the Avengers and getting some help with Hazmat. Carol and Rhodey reconnecting but are interrupted with an unannounced interview with reporter Ripley Ryan. This is further interrupted by the arrival and attack of Nuclear Man, who succeeds in kidnapping Ripley by escaping through a portal. Carol makes it through to follow but the rest of the Avengers are repelled before the portal closes.