"To Kill a Thunder God!" (Table of Contents) 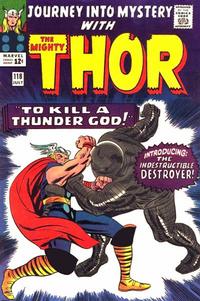 First Line of Dialogue or Text
Remember last ish?
Genre
superhero
Characters
F: Thor; GA: Kim; V: Loki; the Destroyer (I; Odin's robot); a hunter (I)
Synopsis
Thor seeks Loki's Norn Stones in Vietnam. A cruel hunter, aided from afar by Loki, shoots Thor with an anesthetic projectile and brings him down. The hunter then discovers the hidden temple of the Destroyer. The hunter's consciousness enters the Destroyer. It awakens and engages Thor in battle. Loki realizes he has made a mistake-- the Destroyer is too powerful! He tries to warn Odin. Unfortunately, this is the day of the Odinsleep and he may not be disturbed. The gods throw Loki into the "Dungeon of No Escape". The destroyer fires a bolt of elemental force at Thor which will surely kill him!
Reprints

First appearance of the Destroyer and the Odinsleep.

The Crimson Hand (Table of Contents: 3)

First Line of Dialogue or Text
I am almost finished with your map, Thunder God!
Genre
fantasy-supernatural; superhero
Characters
Thor; Loki; Morduk (first appearance); Braggi (vilain; first appearance)
Synopsis
Wise Morduk helps Thor to plot a course for his mission and also bestows the Crimson Hand upon him, a magic glove that forces people to speak the truth. When Loki introduces Braggi, the commander he has handpicked, Braggi cannot help blurting out that the plans to kill Thor from behind once they have set sail.
Reprints

The Hammer Strikes (Table of Contents: 4)

First Line of Dialogue or Text
Dear Stan and Jack; Thor has become the greatest mag out now.
Reprints