The Secret Rose is a single Corto Maltese story set in the year 1924 in Montagnola, Switzerland. Created by Hugo Pratt in the late 1980s. Guido Fuga contributed with artwork of cars and certain backgrounds. Translated from Pratt's original Italian scripts.

The Secret Rose (Table of Contents) 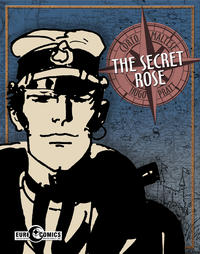 First Line of Dialogue or Text
As he did with his other works, Hugo Pratt carried out extensive research for his surreal, magical story.

Inside facing half of front gatefold cover. Contains a brief description of the story of the volume, and an uncredited old photograph of Lake Geneva.

[map of Switzerland] (Table of Contents: 2)

Reverse side of front gatefold cover (repeated on reverse of rear gatefold cover). Historical map of Switzerland, the setting for the story.

The Secret Rose (Table of Contents: 3)

The Secret Rose (Table of Contents: 4)

First Line of Dialogue or Text
There were two or three things that in retrospect he shouldn't have done.
Genre
adventure; fantasy-supernatural; historical
Characters
Cort Maltese; Jeremiah Steiner; Klingsor; Erica; Herman Hesse
Synopsis
When Corto Maltese accompanies his old friend Professor Steiner to pay a visit to the writer Hermann Hesse, he becomes immersed in a shifting, dreamlike adventure involving the quest for the Holy Grail, the Devil, the Sandman, and Death, as well as the knight Klingsor (a character from the epic poem Parzifal, Wagner’s opera Parsifal, and a novel by Hesse).
Reprints

List of all the volumes in the series, the reverse side is blank.

[map of Switzerland] (Table of Contents: 7)

Reverse side of rear gatefold cover (repeated from reverse of front gatefold cover). Historical map of Switzerland, the setting for the story.

First Line of Dialogue or Text
Reverse side of front gatefold cover (repeated on reverse of rear gatefold cover). Historical map of part of the Argentina including Buenos Aires, the setting for the story.

Inside facing half of rear gatefold cover. Biography of Hugo Pratt and an uncredited photograph of Hugo Pratt in Lucerne, Switzerland, in 1990.