Enter: The Watcher! (Table of Contents) 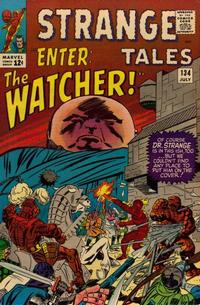 Genre
superhero
Characters
Watcher; Thing [Ben Grimm]; Human Torch [Johnny Storm]; Kang; Merlin; Mr. Fantastic [Reed Richards] (cameo); Invisible Girl [Sue Storm] (cameo)
Synopsis
Though he is not permitted to interfere, The Watcher tells Ben & Johnny of how Kang time-travelled to the days of King Arthur, imprisoned Merlin, and took over the country. In order for the timestream to remain intact, The Watcher sends the pair back in time to defeat Kang. After a hard battle, they send Kang packing, and The Watcher returns them to the present. Later, relaxing after a hard day's fighting, Reed & Sue accuse them of being "loafers."
Reprints

Last episode of the series. The Human Torch and the Thing would be replaced in the next issue with "Nick Fury, Agent Of S.H.I.E.L.D." The Torch later became an occasional co-star beginning in MARVEL TEAM-UP #1 (March 1972). The Thing received his own team-up series in MARVEL FEATURE #11-12 (September-November 1973), then MARVEL TWO-IN-ONE #1 (January 1974). Eventually, Ben would get a solo series in THE THING #1 (July 1983).

Earth Be My Battleground (Table of Contents: 2)

Genre
superhero; fantasy-supernatural
Characters
Dr. Strange; Hamir (unnamed); The Ancient One; Baron Mordo; Dormammu; Clea (unnamed); Mindless Ones
Synopsis
Dr. Strange returns to earth but remains in hiding. Mordo's spirits discover Strange and pursue him. Meanwhile Clea distracts Dormammu by freeing The Mindless Ones. They attack, causing Dormammu to leave Mordo on his own. Strange flies into space and straight into the sun, the spirits fleeing and Mordo worried that it might spell his doom. Strange returns to The Ancient One, who in his weak, delirious condition, speaks of "Eternity." Dormammu secures his domain but wonders if someone has betrayed him. Clea fears she may be found out while Dr. Strange begins to search for "Eternity."
Reprints

Part 5 of 17. Strange would finally find Eternity in STRANGE TALES #138 (November 1965). This episode (and the next one) were inadvertently skipped in sequential reprints in MARVEL COLLECTORS' ITEM CLASSICS in 1970.