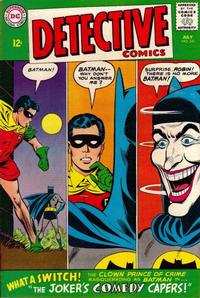 The Joker impersonates four famous silent movie comedians: the Tramp is Charlie Chaplin, Deadpan is Buster Keaton, Cross-eyes is Ben Turpin, and Specs is Harold Lloyd. His last impersonation is of Harpo Marx who became famous in the sound era, not the silent era, despite the fact that he never uttered a word onscreen.

The Strange Worlds of Batman and Robin (Table of Contents: 5) (Expand) /