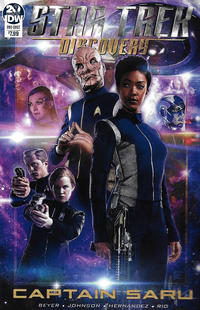 Listing of credits, includes small reproductions of the covers for this issue.

Genre
adventure; superhero; science fiction
Characters
Commander Saru; Ensign Sylvia Tilly; Commander Michael Burnham; Lt. Paul Stamets; Dr. Hugh Culbert (photo); Lt. Joann Owosekun; Admiral Katrina Cornwell; Lt. Keyla Detmer; Lt. Gen Rhys; Lt. Commander Airiam; Lt. R.A. Bryce; other unnamed Discovery officers; Virra (Orion); unnamed Orions; Captain Holden (USS Dorothy Garrod)
Synopsis
The USS Discovery is sent in search of the USS Dorothy Garrod, a science vessel that has disappeared with Ensign Tilly on board. Upon arriving, they find that the crew of the Dorothy Garrod has been abducted, and an away team led by Burnham is also captured. When the Orions demand that the Discovery be turned over to them in exchange for the release of the prisoners, Acting Captain Saru must find a way to save the ship and rescue the captured officers.
Reprints
Keywords
Orions; Paris; the Louvre; USS Discovery NCC-1031; USS Dorothy Garrod NCC-1892

This story takes place after the events of Season One of Star Trek: Discovery, before the arrival of the USS Enterprise.

Saru is only an Acting Captain, his actual rank is Commander.

This story references the Star Trek: Discovery novels "Fear Itself" and "A Way to the Stars".

Art from Cover A

A monthly look at IDW Star Trek books. Includes a break down of pages 6-7 of Star Trek: Discovery: Captain Saru from script to finished art.