On-sale date from ad in House of Mystery #152 and copyright registration.

My Twin -- The Tiger Man! (Table of Contents) 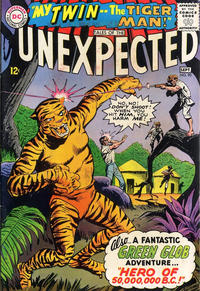 Genre
science fiction
Characters
Green Glob; Reed McCall
Synopsis
Reed McCall prides himself on his independence, but when the Green Glob transports him to prehistoric Earth he must accept the help of a group of alien game hunters against the interplanetary monsters they have brought there for sport.
Reprints

How to Build Prrrrfect Models (Table of Contents: 8) (Expand) /

The Doom-Makers (Table of Contents: 10)

Genre
science fiction
Synopsis
The cast and crew of a movie filmed near a chemical accident exhibit weird destructive powers a month later.

We Screened Hundreds of Olsen Adventures! (Table of Contents: 13) (Expand) /