The Day of the Destroyer! (Table of Contents) 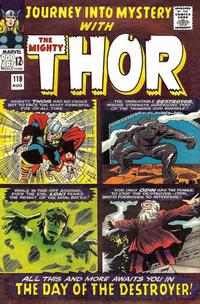 The Day of the Destroyer! (Table of Contents: 2)

First Line of Dialogue or Text
The Destroyer! The mind-staggering menace created countless ages ago by Odin himself!
Genre
superhero; fantasy-supernatural
Characters
Thor; Odin; Norn Queen [Karnilla]; Ularic (introduction); Loki; Destroyer; the hunter
Synopsis
Loki, fearful of the power of the Destroyer, has saved Thor from certain death. As Thor continues to battle for his life, Loki sends a message to Karnilla, the Norn Queen, urging her to wake Odin from the Odinsleep. Odin wakes and realizes that Thor is in danger. Odin tries to assist Thor, but Thor insists that he should wage his own battle. Thor prevails but damages his hammer, the Temple of Darkness is destroyed and Odin is consumed with pride at his son's gallantry. Odin summons Loki and berates him. Loki is punished by being bound in servitude to Ularic, Odin's Royal Warlock.
Reprints
Keywords
Temple of Darkness

First Line of Dialogue or Text
The mission of missions is about to begin!!
Feature Logo

First Line of Dialogue or Text
And the best is yet to come!
Reprints

Letters from (and replies to) Jack Friedman, Paul Del Colle, and Richard Walls. Also includes an advertisement for the official Marvel stationery, an advertisement for Journey Into Mystery Annual #1 and The Mighty Marvel Checklist for comics on sale right now. Comics listed with a synopsis are Fantastic Four #42, Spider-Man #28, Avengers #19, X-Men #12, Daredevil #9, Strange Tales #136, Tales of Suspense #69, Tales to Astonish #71 and Sgt. Fury #21.