U. S. A. COMICS is published bi-monthly by U. S. A. Comic Magazine Corp. at Meriden, Conn. Entered as second class matter, May 2, 1941 at the post office at Meriden, Conn., under Act of March 3, 1879. Single copies 10c; yearly subscription $1.00. Entire contents copyrighted 1941 by U. S. A. Comic Magazine Corp., 330 W. 42nd St., New York, N. Y. No similarity between any of the names, characters, persons and/or institutions appearing in this magazine with those of any living or dead person or institution is intended, and that any such similarity which may exist is purely coincidental.

Who Dares To Defy Captain Terror (Table of Contents) 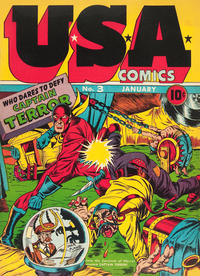 The Magic Crystal of Death (Table of Contents: 2)

The Headless Horseman (Table of Contents: 3)

Genre
superhero
Characters
Major Liberty [John Liberty]; Hendrick Vermeer (death); Gretchen; The Headless Horseman [Peter] (villain, introduction); Paul Revere (as a ghost)
Synopsis
The murder of his old college Dean inspires John Liberty to call upon the spirits of the glorious past to help him avenge this murder: death at the hands of "the Headless Horseman"!
Reprints

The Monster Who Couldn't Be Stopped!! (Table of Contents: 5)

First Line of Dialogue or Text
The maddened monster struck at night and left a trail of terror behind!
Genre
superhero
Characters
The Defender [Don Stevens]; Rusty; Mango [Oldow] (villain, introduction, death)
Synopsis
Don and Rusty visit the carnival and witness the brute strength of Mango, the Human Muscle. Unfortunately, moonlight changes this indivudal into a blood-thirsty monster who has no desire... except to kill!
Reprints

Quicker Than the Eye (Table of Contents: 6)

First Line of Dialogue or Text
Paul North was a magician with the All Star Traveling Carnival.
Genre
adventure
Characters
Paul North; Peter Wayne; Lew Jorden (villain)
Synopsis
Magician Paul North, of the All-Star Traveling Carnival, is informed by the owner of a threat made against the carnival by the owner of a rival, the Brite-Lite Carnival, who feels the All-Star propery is hogging all the most prosperous towns to set up business in.
Reprints

[The Deadly Pixies] (Table of Contents: 7)

Genre
superhero
Characters
Rockman; Princess Alecia (introduction); Pixie king (villain, introduction); Pixies (villains, introduction)
Synopsis
Rockman is asked by a king to save his daughter, captured by the Pixies, taken to their stronghold, and forced to become queen of that realm and the soon-to-be bride of the Pixie King.
Reprints

The Biggest Event of the Century! (Table of Contents: 8) (Expand) /

[The Ambulance Racketeers] (Table of Contents: 9)

Genre
superhero
Characters
Jack Frost; Norton; Mike Dolan (villain, introduction, death)
Synopsis
Jack Frost has to deal with a man who threatened a hospital superintendent, wanting him to buy ambulances and supplies from him... or else!
Reprints