The Death of the Doom Patrol! (Table of Contents) 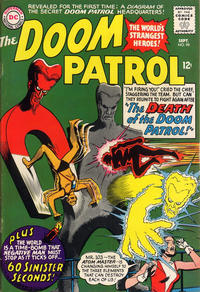 The Death of the Doom Patrol, Part 1 (Table of Contents: 2)

Genre
superhero
Characters
Doom Patrol [The Chief [Niles Caulder]; Elasti-Girl [Rita Farr]; Negative Man [Larry Trainor]; Robotman [Cliff Steele]]; Mr. 103 [Jon Dubrovny] (introduction, villain)
Synopsis
The Chief abruptly disbands the Doom Patrol, but Larry, Cliff, and Rita decide to stay together and build a new headquarters, unaware that the real reason the Chief dismissed them is because he has found that he only has 90 days to live. A new villain, Mr. 103 strikes.
Reprints

Mr. 103 is named for the then-current number of elements in the Periodic Table. He later appears in issues 105 and 106.
Story includes a diagram of Doom Patrol Headquarters.

The letter column mentions Jerry Bails, one of the sponsors of the 1964 Alley Awards, which voted the Doom Patrol among the Best Group of Characters.
Letters submitted by Steve Bishop and Helene Burr, also included are brief excerpts from other letters, including one from Mike Friedrich.

Genre
advocacy
Characters
A man; two boys
Synopsis
Two boys who are polluting a stream are given an anti-pollution lesson by a fisherman. Includes an excerpt from an 1869 Massachusetts Board of Health document.

The story-time lasts only one minute in this story.

The Adventures of Jerry Lewis / promo (ad from the publisher) / 0.33 page (report information)