In My Hand... This Hammer! (Table of Contents) 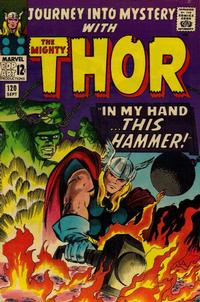 First Line of Dialogue or Text
I knew that here in the great blast furnaces of Pittsburgh, I would find a giant forge to mend my hammer!
Feature Logo

The Mighty Thor!
Genre
superhero; fantasy-supernatural
Characters
Thor; Odin; Ularic the Warlock; Don Blake; Avengers [Scarlet Witch;Quicksilver; Hawkeye]; Hooded Man [Harris Hobbs]; Jane Foster; Loki (villain); Absorbing Man [Crusher Creel] (villain)
Synopsis
Thor repairs his damaged hammer in a furnace in Pittsburgh and then returns the enchanted Norn Stones to Odin in Asgard. Loki, in servitude to Ularic the Warlock, imprisons his new master. Thor returns to Earth to find Blake's surgery has closed and that Jane Foster is missing. He tries to enlist the aid of the Avengers to find her, but discovers that most of his old allies have left the group. Hawkeye's brash attitude offends Thor and he leaves too. Loki, meanwhile, has used Ularic's enchantments to reach into outer space and bring back Thor's old foe, the Absorbing Man. He's not happy!
Reprints
Keywords
Asgard; Norn Stones; Pittsburgh PA

Thor was absent during the events of The Avengers #16 in which a new team was assembled. He is therefore surprised to be greeted by new members Hawkeye, Quicksilver and the Scarlet Witch.

First Line of Dialogue or Text
The crew has been gathered...
Genre
fantasy-supernatural; superhero
Characters
Thor; Odin; Loki; Volstagg; Hogun; Kroda the Duellist; Magrat the Schemer; Mrs. Volstagg (introduction)
Synopsis
Thor and his companions set sail on a mission to defeat the forces of evil which threaten Asgard. They go with Odin's blessing but, within minutes, they are brawling amongst themselves. Loki defends Volstagg from Loki's cruelty. Magrat the Schemer wishes to be in favor with Loki and urges Kroda the Duellist to assassinate Thor. Kroda is prevented from doing so by Hogun the Grim and peace returns to the vessel and its crew. Back in Asgard, Odin reflects upon the wisdom of sanctioning such a quest.
Reprints

First Line of Dialogue or Text
Dear Stan and Jack, I've had it!
Feature Logo