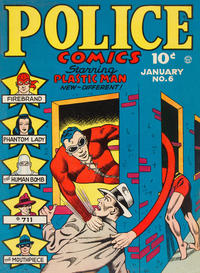 Genre
adventure; crime
Characters
#711 [Daniel Dyce]; Lush Chikko (prisoner, informant)
Synopsis
#711 decides to protect the life of one of his inside informants who had testified against a local mob boss.

[Case of the Disembodied Hands] (Table of Contents: 6)

Genre
superhero
Characters
Plastic Man [Patrick "Eel" O'Brian]; Chubby Rankin [aka "The Man With the Stealing Hands"](villain)
Synopsis
Chubby Rankin was cursed by an Indian prince and his hands became capable of detaching themselves from their owner's body. He couldn't stop them from stealing, and eventually cut them off. Eventually, Plas threw them into a furnace to set the man free.
Reprints

[They Stole the Commissioner's Car!] (Table of Contents: 8)

Blood Will Tell (Table of Contents: 10)

[The Autogiro Spies] (Table of Contents: 11)

[Defeating the Drought] (Table of Contents: 12)

First Line of Dialogue or Text
In his lab, Roy Lincoln, partly clad as the Human Bomb, paces up and down...
Genre
superhero
Characters
The Human Bomb [Roy Lincoln]; Jean Adams [formerly Jean Caldwell]; The Black Vanguards (villains, introduction for all)
Synopsis
Impatient with Roy's frequent disappearances, Jean nearly sees his face when he changes into the Human Bomb to battle the Black Vanguards, a Nazi group, that is brought down, not by the use of 27-QRX, but a standalone chemical.