The Price Part 1 (Table of Contents)

Artist signed "a la García López" as this cover is an homage to the cover of Tales of the Teen Titans (DC, 1984 series) #72 by José Luis García-López. 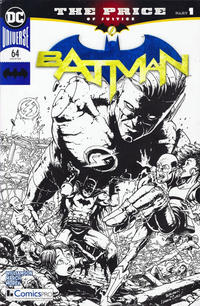 The Price Part 1 of 4 The Price of Justice (Table of Contents: 2)

Wally and the other heroes were killed in an attack at Sanctuary in Heroes in Crisis (DC, 2018 series) #1.