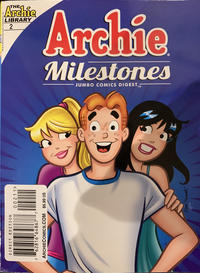 Spring Is Spring (Table of Contents: 4)

Genre
humor; teen
Characters
Jughead Jones; Hot Dog; Moose Mason; Midge Klump
Synopsis
Jughead celebrates the coming of spring and the rebirth of nature. He also celebrates the fact that he's the only one who escapes the lovesickness that usually comes with spring fever.
Reprints
Keywords
spring fever

The poem Jughead recites in the splash panel ("Spring is sprung, the grass has riz, I wonder where the flowers is") is an anonymous poem sometimes known as the unofficial anthem of Brooklyn and other areas of New York.

First Line of Dialogue or Text
Boy, Archie! You sure make a big fuss over a little rain!
Genre
humor; teen
Characters
Archie Andrews; Jughead Jones
Synopsis
Jughead makes fun of Archie for how bundled up he is for the rain.
Reprints

Genre
humor; teen
Characters
Betty Cooper; Veronica Lodge; Jughead Jones
Synopsis
Betty, Veronica, and Jughead complain about how windy it is in the springtime and use various expressions and sayings to describe the wind. The wind blows Veronica into a cute guy.
Reprints
Keywords
spring; wind; windy

The Dinner Belle! (Table of Contents: 25)

Gentlemen to the End (Table of Contents: 26)

Genre
humor; teen
Characters
Wilbur Wilkins; Laurie Lake; Alec; Linda Moore; Mert
Synopsis
Linda follows Laurie and Wilbur because she feels they are acting suspicious. She follows them to an unknown house where Laurie brings her inside and introduces her to a blind date named Mert.
Reprints

Genre
humor; teen
Characters
Jughead Jones; Archie Andrews; Veronica Lodge; Betty Cooper; Reggie Mantle; Gladys Jones
Synopsis
To his horror, Jughead is having a recurring dream where Betty and Veronica are fighting over him... and he likes it.
Reprints
Keywords
hypnotism; nightmare

Genre
teen
Characters
Reggie Mantle
Synopsis
Reggie makes his date pay for half of supper so she refuses her half of the kiss at the end of the night.
Reprints

The Dating Game (Table of Contents: 34)

Genre
teen
Characters
Moose Mason; Midge Klump; Pop Tate (cameo)
Synopsis
Midge decides that she and Moose should date other people for a while, but they are quickly drawn back together.
Reprints
Keywords
baseball; carnival; roller coaster

Love Is Nasty (Table of Contents: 36)

Genre
teen
Characters
Betty Cooper; Veronica Lodge; Cheryl Blossom; Reggie Mantle; Archie Andrews; Mary Andrews; Mrs. Blossom; Jason Blossom
Synopsis
Cheryl and Reggie team up to get Archie away from Betty and Veronica, so each can be the center of attention of the partner they want.
Reprints

Title page for the next section featuring stories about the Archie gang travelling to famous landmarks.

Genre
adventure; humor; teen
Characters
Archie Andrews; Betty Cooper; Veronica Lodge; Jughead Jones; Reggie Mantle
Synopsis
After the gang wins a trip to the 1964 World's Fair, the boys have to save Betty and Veronica when they're in an out-of-control cab with an insane driver.
Reprints
Keywords
bank robbery; monorail; New York's World's Fair

"Art" credited to Bob White, no mention of Marty Epp, that inker credit comes from the index of the original printing.

Around the World with Reggie (Table of Contents: 41)

Genre
science fiction; teen
Characters
Archie Andrews; Veronica Lodge; Jughead Jones; Betty Cooper; Moose Mason; Dilton Doiley; Chip; UB-12
Synopsis
Archie and the Riverdale gang go along on a trip to the Kennedy Space Center with a group of elementary students studying to be Young Astronauts. Along the way, one of the students has a dream about their bus traveling to outer space.
Reprints
Keywords
astronauts; dreams; Kennedy Space Center; Young Astronaut Council

The Young Astronaut Council was established by the White House in 1984 in an effort to promote greater proficiency and interest in science, math and technology using space as the underlying theme.

[Subscribe Today and Save At store.archiecomics.com] (Table of Contents: 47) (Expand) /

From India with Love! (Table of Contents: 49)