This issue continues the storyline from Avengers: Shards of Infinity #1 (June 2018). 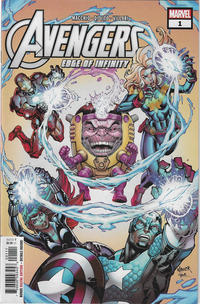 First Line of Dialogue or Text
And there came a day, a day unlike any other, when Earth's Mightiest Heroes found themselves united against a common threat.
Genre
superhero

Issue credits excluding those for the covers are repeated on the third page of the story.