The Prize Is.. Earth! (Table of Contents) 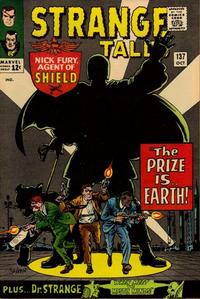 Genre
spy; superhero
Characters
Nick Fury; HYDRA; Dum Dum Dugan; Gabe Jones; Leslie Farrington (Chairman, Imperial Industries International); Arnold Brown (Farrington's secretary); Imperial Hydra ("Imperial Leader"); Agent "G" [Laura Brown] (unnamed)
Synopsis
SHIELD agents attempt to get microfilm to HQ but they fail, sacrificing themselves to prevent falling into HYDRA hands. The microfilm would have revealed the location of the Betratron Bomb, which Hydra will use to ransom the world. Leslie Farrington, chairmanship of Imperial Industries tells his assistant, Brown to track info on every board member, one of which is the Imperial Hydra. In a secret chamber below the boardroom Hydra's leader speaks to "Agent G", his daughter who begs him to end his mad plan, but he replies he is doing it for her benefit. The bomb launches without a hitch...
Reprints

Part 3 of 7. 1st appearance of the SHIELD Communication Center. The chase sequence, from train to car-turned-submarine vs. frogmen is strikingly similar to the one in the film THE SPY WHO LOVED ME (1977). 1st modern appearance of Dum Dum & Gabe (regular cast members in SGT. FURY AND HIS HOLWING COMMANDOS). The relationship between Imperial Hydra & Agent G pays tribute to that of Doctor Fu Manchu & Fah Lo Suee, or The Yellow Claw and his niece, Suwan.

When Meet the Mystic Minds! (Table of Contents: 2)

Genre
superhero; fantasy-supernatural
Characters
The Ancient One; Dr. Strange; Hamir (unnamed); Baron Mordo
Synopsis
Desperate to learn the secret of "Eternity", Dr. Strange probes the unconscious mind of The Ancient One, meeting one deadly trap after another, until at last, he reaches the mind of his beloved Master, and convinces him of his identity and good intentions. After recovering, Strange departs, and high atop a Himalayan peak, recites "one of the most potent spells of all time". When he's finished, his amulet floats into the air, expands in size, and a doorway opens-- thru which Strange steps. Seconds after the amulet vanishes, Mordo appears, just barely too late to catch up with his mortal enemy.
Reprints