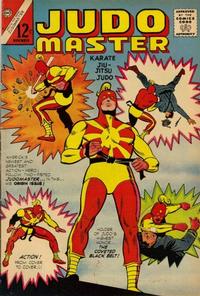 Part I (8 pp.), Part II The Dojo! (6 pp.), Part III Judomaster is Born (6 pp.).
Continued in Judomaster (Charlton, 1966 series) #89.
Writing credit given to Joe Gill in the comic book. Frank McLaughlin states he wrote all the Judomaster stories. McLaughlin is quoted as saying, "As far as writing and drawing Judomaster...Joe Gill’s name appearing as writer, (on Judomaster), was to satisfy John Santangelo’s arrangement with Joe. I wrote all of those, myself." (retrieved 1 August 2016 from http://www.firstcomicsnews.com/?p=228955).

Fight for Freedom (Table of Contents: 5)

Genre
spy
Synopsis
Tells the secret story of a heroic pilot named John Howard Mellon who went behind the Iron Curtain and rescued a defecting scientist.

Placed between pages 8 and 9 of the main story.

Sport of Judo (Table of Contents: 14)

Genre
martial arts
Characters
Sarge Steel (host); Master Uyeshiba
Synopsis
In this three-page feature he describes judo, aikido, and karate with special emphasis on the mental requirement of all three.