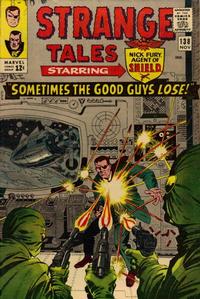 Part 4 of 7. The tank which crashes thru a wall and then launches a section of itself as a missile is remarkably similar to the one used by Mr. Freeze in the film BATMAN AND ROBIN (1997). The board room scene is reminiscent of the film EXECUTIVE SUITE (1954).

If Eternity Should Fail! (Table of Contents: 2)

First Line of Dialogue or Text
Last issue, we saw Dr. Strange wrest the secret of Eternity from the mind of the Ancient One!
Genre
superhero; fantasy-supernatural
Characters
Ancient One; Baron Mordo; Clea (unnamed); Dormammu; Eternity (introduction); Hamir; Doctor Strange [Stephen Strange]
Synopsis
In another dimension that defies description, Dr. Strange comes face-to-face with Eternity, who learns that Strange is indeed worthy of The Ancient One's trust. He knows that if Mordo & Dormammu are not stopped, all mankind will be in jeopardy. But after all Strange has been thru, Eternity tells him he already has the power he needs. Feeling dejected, Strange returns to the cave to find his master gone. Mordo's spirits lead him to Mordo, who tells Strange "The game is lost!"
Reprints