Another World, Another Foe!; By Force of Arms! (Table of Contents) 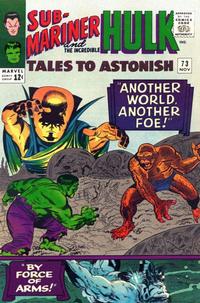 By Force of Arms! (Table of Contents: 1)

First Line of Dialogue or Text
Nearing the end of his quest for Neptune's sacred trident, Prince Namor is...
Genre
superhero
Characters
Sub-Mariner [Namor]; Lady Dorma; Demon of the Diamonds (villain); Warlord Krang (villain); Faceless Ones (cameos)
Synopsis
Neptune sends a group of electric eels to help Namor defeat the Demon of the Diamonds. Learning that Dorma has been exiled to the land of the Faceless Ones, Namor heads off to rescue her. Back in Atlantis, the citizens begin an active revolt against Krang.
Reprints

Another World, Another Foe! (Table of Contents: 3)

First Line of Dialogue or Text
Ignoring the Leader's band of Humanoids who attack him with...
Genre
superhero
Characters
Hulk [Bruce Banner]; The Watcher; Leader [Samuel Sterns] (villain); Humanoids (villain); an alien (cameo)
Synopsis
Discovering the bullet that is lodged in the Hulk's brain, the Leader dissolves it with a laser and bathes our hero with gamma rays to give him strength. The Hulk still has Banner's mind but can no longer transform into human form thanks to the extra blast of radiation. Indebted to the Leader for saving his life, the Hulk agrees to be teleported to the Watcher's planet where he has been commanded to steal the "ultimate machine" but finds that said machine is also sought by the most powerful creature in the galaxy.
Reprints

Esposito inks per Nick Caputo via the GCD Error Tracker (Error 3441, 3 March 2010). The credits erroneously credit only Kirby on layouts and Bob Powell on finished art.

First Line of Dialogue or Text
Well, the suspense is over!
Reprints