Among Us Stalk...The Sentinels! (Table of Contents) 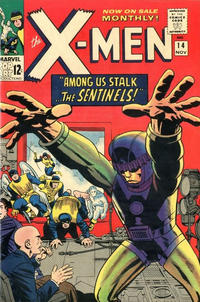 Among Us Stalk...The Sentinels! (Table of Contents: 1)

First Line of Dialogue or Text
Just another few minutes, Scott!
Genre
superhero
Characters
The X-Men [Professor X; Cyclops; Marvel Girl [Jean Grey]; Angel; Beast; Iceman]; Sentinels (introduction); Dr. Bolivar Trask (introduction); Zelda; Mr. Worthington; Mrs. Worthington
Synopsis
After their battle with the Juggernaut, Xavier sends the X-Men on vacation. Reading a story in the paper about Dr. Trask and the mutant menace, Professor X calls for a televised debate with the anthropologist. During the broadcast, Trask unveils his Sentinels, robots built to capture and nullify mutants. The Sentinels proclaim themselves superior to humans and prepare to take over. Xavier calls his X-Men to help. When one of the Sentinels falls, the giant robots capture Trask and return to their base. The X-Men follow and find a hidden complex with weaponry aimed directly at them.
Reprints