The Origin of Beast-Boy! (Table of Contents) 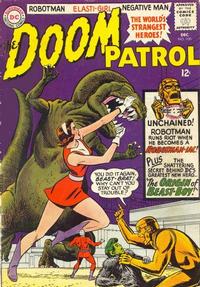 Builders of the Future! (Table of Contents: 1)

Inside front cover; published in cooperation with the National Social Welfare Assembly.

The Fantastic Origin of Beast-Boy, Chapter 1 (Table of Contents: 2)

Galtry (first name Nicholas given in #101) addresses Beast Boy as "Craig" in this story and only this one, even though Jill called him Gar in the previous issue. New Teen Titans (1980 series) would establish that this is short for "Garfield." The character's last name "Logan" is first given--in passing, as if it is nothing new--in DP #102. Is he in full "Craig Garfield Logan," and Galtry did not realize that the boy went by his middle name until just after the events of #100?

Genre
superhero
Characters
Doom Patrol [The Chief [Niles Caulder]; Elasti-Girl [Rita Farr]; Negative Man [Larry Trainor]; Robotman [Cliff Steele]]; Beast Boy [Gar Logan] (origin); Mark Logan (Beast Boy's father, flashback, death); Marie Logan (Beast Boy's mother, flashback, death); Dr. Weir [also as Durling] (villain)
Synopsis
Beast Boy recounts his origin for the Doom Patrol, how he contracted a rare disease as a child and his father used his reverse evolution ray to cure him, but with the side effects of his skin turning green and gaining the ability to change into any animal. The Doom Patrol realizes that Dr. Weir has stolen the secret of reverse evolution from Beast Boy and is using that to turn lizards into dinosaurs which he controls to commit robberies.
Reprints

Genre
superhero; humor
Characters
Robotman [Cliff Steele] (origin); The Chief [Niles Caulder]
Synopsis
This first chapter of a solo series details the origin of Robotman, and his first encounter with the Chief, in which Cliff promises to kill the man who planted his brain into a robot body, not knowing it was Niles Caulder.
Reprints

Story continues in issue #101.
Winner of the 1965 Alley Award for Best Short Story.
Pages 2-5 of this story were inserted as a flashback into the reprint of "Robot-Maker Must Die" in The Brave and the Bold (DC, 1955 series) #102 (June-July 1972).
This story's telling of Robotman's early life directly contradicts the DP origin story in My Greatest Adventure (DC, 1955 series) #80.