This issue is a variant of Green Lantern (DC, 1990 series) #54 [Direct Sales]. There exist further variants. 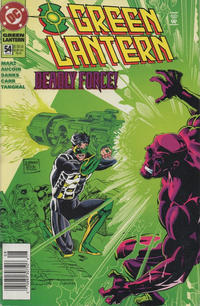 Genre
superhero
Characters
Major Force; Green Lantern [Kyle Rayner]; Alex DeWitt (death)
Synopsis
While Green Lantern is off dealing with a minor time paradox, Major Force is back at the house cutting up his girlfriend and stuffing her in the fridge to let Kyle know he means business about taking his ring from him.
Reprints

This issue prompted Gail Simone to create a website called "Women in Refrigerators" highlighting how women are often "killed, maimed or depowered" in comics as a plot device. The term caught on and has passed into common usage both academically and in popular culture, usually referred to as "Women in Refrigerators Syndrome."