While a Universe Trembles! (Table of Contents)

images of Loki, Odin, Demon and the Absorbing Man taken from earlier stories. The unaltered art originally had Thor on the cover alone. 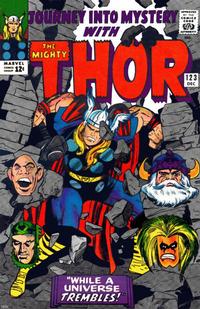 While a Universe Trembles! (Table of Contents: 2)

The Mighty Thor!
Genre
superhero; fantasy-supernatural
Characters
Thor; Odin; Harris Hobbs; Loki; Absorbing Man [Crusher Creel]; Demon
Synopsis
Thor and reporter Harris Hobbs arrive in Asgard in time to witness Odin’s defeat of Loki and Absorbing Man, both of whom are banished into outer space. Hobbs wants to photograph the events but discovers that his camera has been broken. Meanwhile, in an Asian jungle, a tribal witch doctor discovers a Norn stone which grants him great power.
Reprints
Keywords
Norn Stone; Scepter of Supremacy

First appearance of the Demon.

More Nutty News and Notes from One Marvel Madman to Another! (Table of Contents: 4) (Expand) /

The Jaws of the Dragon! (Table of Contents: 5)

First Line of Dialogue or Text
Even as Thor's mutinous crew of argonauts heads into the dreaded Pillars of Utgard on the uncharted Sea of Fear...
Genre
fantasy-supernatural
Characters
Thor; Balder; Odin; Hogun; Volstagg; Asgardians; Utgard Dragon (introduction, dies)
Synopsis
In Asgard, Odin has a premonition concerning Ragnarok. Meanwhile, Balder saves his fellow crewmates from certain death by blowing his horn. The effects of his actions are that the Dragon of Utgard is destroyed and the ship has safe passage.
Reprints

Who Says That Marvel Madness Isn't Taking Over the World?!! (Table of Contents: 6) (Expand) /