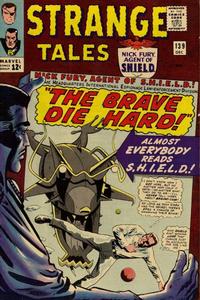 Part 5 of 7. Name of HYDRA's leader changed from "Imperial Hydra" to "Supreme Hydra" in this episode.

Genre
superhero; fantasy-supernatural
Characters
Dr. Strange; Baron Mordo; Dormammu; The Ancient One; Clea (unnamed)
Synopsis
The Ancient One is revealed to be Dormammu's captive. Dr. Strange's mentor tells Strange he must fight on but can only expect token aid. Dormammu forces Clea to watch Strange's defeat. Strange and Mordo square off and battle. After a time, Dormammu grows frustrated at how Mordo has been out-fought and prepares to strike personally.
Reprints