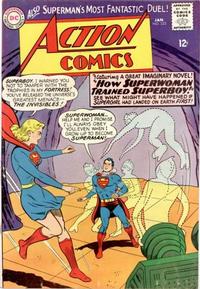 The Magic Card! (Table of Contents: 1)

Genre
advocacy
Synopsis
A group of kids discover the library.

The Super-Vengeance of Lex Luthor! (Table of Contents: 2)

Job Number
6347
First Line of Dialogue or Text
I'd like a model plane!
Genre
humor

Genre
superhero
Characters
Superwoman [also appears as Carole Zorelle]; Superboy [also appears as Cal Ellis]; Zor-El; Allura; Jor-El; Lara (cameo); Lex Luthor (cameo); Jimmy Olsen (cameo); Dick Wilson; the Invisibles
Synopsis
On Krypton, Zor-El discovers that the planet is doomed, and he and his family travel to Earth, where they gain super-powers. Not long after, Gold Kryptonite takes away the powers of Zor-El and Allura, and they train their young daughter Kara to grow into a super-heroine. Years later, after Zor-El and Allura die, Kara's cousin Kal-El arrives on Earth from Argo City, and she gives him a secret identity so that he can secretly train to use his new super-powers.
Reprints
Keywords
Argo City; Fortress of Solitude; Gold Kryptonite; Imaginary Story; Krypton

Imaginary story, continues in next issue.