Sightless, in a Savage Land! (Table of Contents)

Colletta alterations on Ka-Zar per Nick Caputo, confirmed in an interview by Romita. In John Romita..And All That Jazz! Romita stated: "If you look at my first Daredevil cover, I didn't do half of those pen lines in Ka-Zar's arms and legs. Most of them were done by Vinnie Colletta." 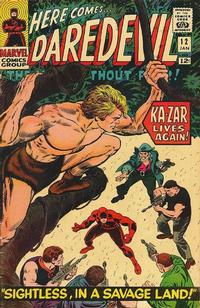 Sightless, in a Savage Land! (Table of Contents: 1)

According to interviews with Romita, he pencilled the first two pages on his own and Kirby provided breakdowns from page 3 on.