The End of Hydra! (Table of Contents) 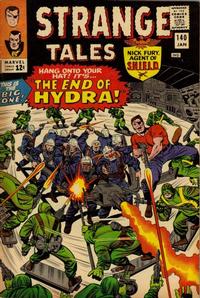 The End of Hydra! (Table of Contents: 1)

Part 6 of 7. Arnold Brown revealed as Imperial Hydra in this episode. In this episode, Nick Fury is a dead ringer for Ralph Meeker, who played Mike Hammer in the film KISS ME DEADLY (1955), while Arnold Brown bears a resemblance to Warren editor Archie Goodwin!

More Nutty News and Notes From One Marvel Madman to Another! (Table of Contents: 2) (Expand) /

The Pincers of Power! (Table of Contents: 3)

Genre
superhero; fantasy-supernatural
Characters
Dr. Strange; Baron Mordo; Dormammu; The Ancient One; Clea (unnamed); rulers of neighboring dimensions
Synopsis
Dormammu sends Strange, Mordo & The Ancient One to a neutral dimension. He then uses a sleeping potion on the Mindless Ones, so his domain will be temporarily safe and summons rulers of nearby dimensions. Dormammu arrives to challenge Strange in person to battle for total mastery of Earth! Strange accepts, then Dormammu declares they shall fight using only the "Pincers Of Power", and no other spells or incantations. This way, it will be a battle of skill, not power. The battle is fierce-- but when it appears Strange is about to overcome his adversary, Mordo strikes Strange from behind...
Reprints