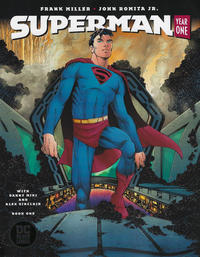 inside front cover: Creator credits overlaid on a two-tone (black & green) silhouette illustration of a city, and the indicia.

Superman Year One Book One (Table of Contents: 2)

First Line of Dialogue or Text
The air seems to boil.
Genre
superhero
Characters
Clark Kent [Kal-El] (as a baby through high school graduate); Jor-El (death); Lara (death); Jonathan Kent; Martha Kent; Hiram Caustic; Mr. Granger; Gladys; Mickey; Pete Ross; Lana Lang; Jeremy; the Weirdos; Billy Bob Markham; Vice Principal Mirabito; Carlos; Halford; Chartrand; Travis; Macauley; Stillwell; Gallo
Synopsis
Sent in a rocket from the planet Krypton before it exploded, Kal-El arrives on Earth and is adopted by the Kents. Growing up as Clark Kent, he learns to control his powers so as not to hurt anyone. That is put to the test when Clark stands up to school bullies who are picking on his friends. When the bullies threaten Lana, Clark stops the bullies, and develops a romantic relationship with Lana. At graduation, Clark enlists in the Navy and leaves Smallville.
Reprints
Keywords
Krypton; Smallville

inside back cover: Publisher credits overlaid on a two-tone (black & green) silhouette illustration of a city.

First Line of Dialogue or Text
You can't have justice without truth.
Genre
superhero
Reprints