The cover is taken directly from the promotional ad for this issue in All-Star Comics #8. 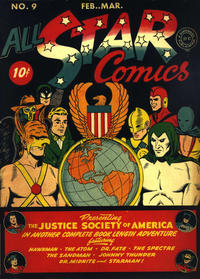 The main splash page art replicates the cover except for the eagle and shield emblem, which sits atop the globe on the cover. The unnamed FBI Chief in Washington logically refers to J. Edgar Hoover. This is the last JSA story in All-Star to display the Sandman in his gas-masked attire.

Genre
superhero
Characters
Hawkman [Carter Hall]; unnamed Mexican Policeman; Johan Krauss [also as a Mexican Secret Police agent] (villain, Nazi spy); Krauss' gang (villains)
Synopsis
Hawkman is sent to Mexico to deal with the Nazi threat to wreck the Southern Pacific Railroad in case of war, and meets with a man supposedly to be a Mexican Secret Police agent, but actually the villain in disguise. Hawkman then infiltrates the spy ring, gathers documents proving espionage activities, rounds up the spies, then heads for South America to meet up with the other JSA members.
Reprints
Keywords
Guaymas; Manzanillo; Mexico; Plaza Hotel; Southern Pacific Railroad

Genre
superhero
Characters
The Spectre [Jim Corrigan]; unnamed Chief of the Argentine Police; Carlos (aide to the Chief); Fifth Columnists [Hermann; rest unnamed] (villains, some die)
Synopsis
The Ghostly Guardian arrives in Argentina to deal with Fifth Columnist activity concerning the disappearance of Army planes, and spots an "octopus of the air" machine causing the trouble. While its pilots commit suicide, the real leader has been captured and is in custody. Jim Corrigan and the Argentine Chief of Police take the villain toward a prison when other enemy agents intercept them. The Spectre makes short work of the octopus planes and captures the spies.
Reprints
Keywords
Argentina; Buenos Aires

Genre
superhero
Characters
The Sandman [Wesley Dodds]; Senor Jose Ortez (Secret Service officer); Nazi saboteurs (villains)
Synopsis
Venezuela is on the docket for the Sandman, who must investigate Nazi attempts to sabotage oil wells leased to the United States and Great Britain. He discovers the saboteurs and wades into them before a shot fells the Man of Sleep, and who is also drugged while they try to carry out their plans to destroy wells in a lake. Awakening, the Sandman heads for the lake, mops up the villains and prevents the destruction of the wells.
Reprints
Keywords
Venezuela; Wirepoon

Genre
advocacy; superhero
Characters
The Flash [Jay Garrick]; Doc Benson; Tommy (infantile paralysis patient); Tommy's mother and father
Synopsis
After discovering the need for an iron lung to save the life of a small child, the Flash races out to secure one, thus saving the little boy's life.
Reprints
Keywords
Smith Hospital

A separate illustrated text section below the 6-panel story further emphasizes the need for more such equipment as Tommy required in the story, and the publisher encourages all readers to donate as much money as they can to the President's Diamond Jubilee.

Genre
humor; superhero
Characters
Johnny Thunder; The Thunderbolt [Archibald]; Bradlee Zenea [aka Bradley Zenea] (espionage agent); Miguel (villain, spy); other unnamed spies (villains)
Synopsis
Johnny is sent to Cuba to discover the whereabouts of master espionage agent, Bradley Zenea, but is captured by a gang headed by a spy named Miguel. Johnny tracks the spies down, but can't best them because the Thunderbolt will only respond to Johnny's magic words in Spanish! Johnny is caught and the gang decides to feed Johnny to the sharks! By accident, brother John says "Say You" in Spanish and the T-Bolt helps Johnny mop up the opposition.
Reprints
Keywords
Cuba; Say You (Dice-Usted)

Genre
aviation
Characters
Hop Harrigan; Tank Tinker; Colonel Dunbar (death); Colonel Dunbar's unnamed wife (death); phony Colonel Dunbar (villain, spy); other spies (villains)
Synopsis
Hop wonders what Tank is up to (after reading about the death of a Colonel Dunbar's wife), so he decides to follow him, but he captured by a group of men who think he is a spy. But in time, the man Hop is coming to see, turns out to be a phony and a German spy milking young men out of $100 each to join a League, and forwarding the money to the German government.
Reprints
Keywords
Guard America League

Genre
superhero
Characters
Starman [Ted Knight]; unnamed Chief of the Bolivian Secret Police; the Nazis (villains)
Synopsis
Starman heads for Bolivia and meets up with a member of that nation's secret police, and learns that the Nazis are exploiting the nation's tin mines, but no one can discover just how the Germans get in and out of the mines without being seen.
Reprints
Keywords
Bolivia; Gravity Rod; Lake Titicaca

Genre
superhero
Characters
Justice Society of America [Hawkman [Carter Hall]; Dr. Fate [Kent Nelson]; The Spectre [Jim Corrigan]; Dr. Mid-Nite [Dr. Charles McNider]; The Sandman [Wesley Dodds]; Johnny Thunder]; The Thunderbolt [Archibald]; Hooty (an owl); Inza Cramer; Shiera Sanders; Dian Belmont; Myra Mason; Daisy Darling; Bradley Zenea; Bradley's fiancee
Synopsis
As the JSA members return from their assignments, they are surprised to learn that their girl friends are there to meet them. However, Johnny has not returned and Daisy is very concerned. Just then, Johnny rushes in, being pursued by Bradley Zenea and a man, thinking that he had agreed to marry the girl. He discovers that his ideas were wrong, so he goes out for a moonlight walk with Daisy. As they gaze at the moon, Johnny wishes that he had Daisy all alone...on the moon...and the Thunderbolt grants that wish!
Reprints
Keywords
Say You

The FBI Chief is voted to be an Associate Member of the JSA at the conclusion of the story.