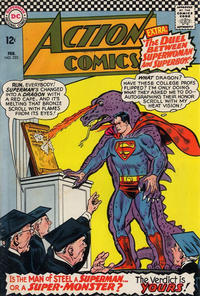 The Invisible Handicap! (Table of Contents: 3)

First Line of Dialogue or Text
Ha, ha, ha! Look at that dopey drawing!
Genre
advocacy
Synopsis
The class get a lesson on not making fun of those who are different.

On the page immediately following page 7 of the previous story sequence.

Superman and Batman and Robin / promo (ad from the publisher) / 0.33 page (report information)

The Many Faces of Superman (Table of Contents: 7)

This is essentially a series of model sheets for Superman's face by Curt Swan. It's a guide to Superman's features showing Superman's face from every angle and undergoing every expression. DC encouraged readers to figure out what emotion each picture represented and mail in their guesses to the letter column.

This is NOT reprinted in Superman (DC, 1939 series) #245, although that page is similar in content.

The Duel Between Superwoman and Superboy! (Table of Contents: 8)

In one answer, the editor announces a Superman musical, with a tentative title of "It's Superman", produced by David Merrick and with music by the team that turned out "Bye Bye, Birdie" and "Golden Boy" (Charles Strouse and Lee Adams). The cast hadn't been announced yet, although "rumor has it that Steve Allen may play Clark Kent."

In another answer, the editor says that they are considering a solo Supergirl title, particularly if the upcoming Supergirl 80-Page Giant were to sell out.