How Close Can You Come to Guessing... The Secret of Ka-Zar's Origin! (Table of Contents) 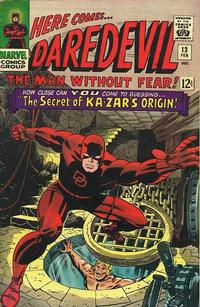 The Secret of Ka-Zar's Origin! (Table of Contents: 1)

Daredevil, the Man Without Fear!
Genre
superhero
Characters
Daredevil [Matt Murdock]; Ka-Zar [Lord Kevin Plunder] (origin); Zabu; Foggy Nelson; Karen Page; Plunderer [Parnival Plunder] (villain, origin); Maa-Gor (villain)
Synopsis
Daredevil and Ka-Zar battle the Plunderer as the villain regales them with his origin and the origin of his savage brother. The Plunderer is after half of a necklace that his father gave the two brothers that will open a vault to a substance that destroys all weaponry. Everybody gets greedy and even the pirates and the butler vie for both halves of the medallion.
Reprints

The Latest Gossip, Gags, and Gizmos From Your Bullpen to You! (Table of Contents: 2) (Expand) /