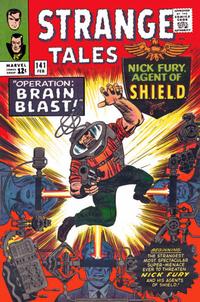 Part 7 of 7 / Part 1 of 3. 1st appearance of SHIELD's E.S.P. Division, Mentallo, The Fixer. In this episode, Arnold Brown bears a resemblance to actor Arthur O'Connell. The new story starts on page 8; when Stan Lee wrote "at that very moment", he should really have said "a week later", as reading the page literally makes it appear Fury (who was heading for dinner & a long sleep) was in 2 places at the same time!

Let There Be Victory! (Table of Contents: 3)

Genre
superhero; fantasy-supernatural
Characters
Baron Mordo; The Ancient One; Dormammu; Clea (unnamed); Dr. Strange; rulers of neighboring dimensions; Hamir The Hermit; Mordo's Demon
Synopsis
Dormammu consigns Mordo to the Dimension of Demons. Strange declares he is able to continue the fight and manages to best him in combat! Dormammu swears not to attack Earth. Back in The Ancient One's home, Hamir prepares a banquet for Strange & his master. Dormammu banishes Clea to a place where Strange can never find her. The Ancient One assures Strange that there are many who may now be able to help in his search for the girl. The Mystic Globe shows traces of leftover evil spreading. Mordo's Demon & 2 disciples leave a trap for Strange: a bomb! Strange returns unaware of the danger.
Reprints